Following my previous blog which interrogated the significance of interactivity, virtuality and immersion to digital Holocaust memory, today, I explore another term that is often used to describe the digital – immateriality – and think about it in relation to recent commemorative events during the Covid-19 Pandemic, which of course could only take place online.

Paul Williams (2007) has argued that although memorial museums tend to remember events that are object poor due to their destructive nature, these institutions nonetheless rely heavily on displaying objects. This may include perpetrator and family photographs of the victims, instruments of torture, the material of daily life in concentration or prison camps, or personal belongings confiscated on arrival.

These elements come to define the ritualistic and communal dimensions of commemoration.

So what happens when we can only commemorate online? Does commemoration lose its material resonance?

The simple answer to this question is ‘no’.

The idea that the digital is immaterial is a misnomer. Bolter and Grusin (1999) draw attention to the significance of hypermediality in our digital encounters – we are always aware of the physical interface, whether this is our mobile device, a computer or a clunky VR headset. The interface that we see also functions thanks to the interior, physical circuitboards that we don’t see (the significance of this matter becomes particularly evident when we think of the landfills of physical waste created by our regular upgrading of digital hardware).

Laura Marks (2002) has argued that we take the materiality of the digital seriously on an atomic level – it is after all as much constructed of the base elements of matter, such as electrons and photons as are other things in our physical world. This is perhaps particularly foregrounded with quantum computing.

Whilst we think of our communication with other devices as happening in seamingly invisible ways, there is a material infrastructure behind this: signals oscillate through space, ‘cloud systems’ are large physical servers, and our Internet passes through underwater cables.

As something embedded into our everyday lives – perhaps now more than ever – the digital also has a material resonance in the ways it affects our actions and behaviours. The digital does not lie beyond our physical experience, but rather is embedded and entangled within it. It is this material dimension that I want to focus on today with two examples of recent commemorative practices: 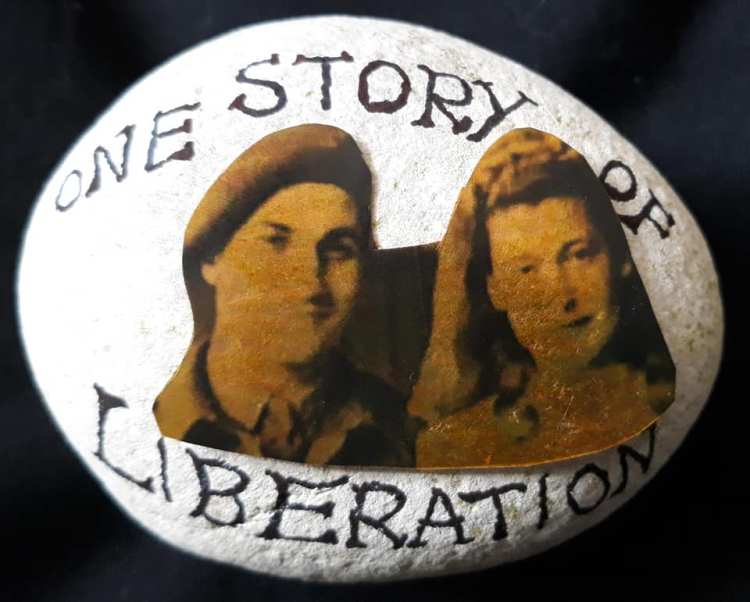 2.  During the UK Yom HaShoah commemorations on Monday 20th April, we see the broadcast logic once again, used here to bring people together in a moment of simultaneous ritualistic behaviour. This time, in the lighting of candles in memory of Holocaust victims. Those involved as contributors to the event, broadcast via their website and YouTube, were seen lighting their candles in the gallery view provided on the video:

Viewers, who had these special commemorative candles – each of which has the name of a different Holocaust victim attached – were then invited to follow the actions broadcast on the live stream and to share their activity on Twitter, as many did:

So, what changes when these activities move online?

We still have the construction of an imagined community united in the simultaneity of their actions (Benedict Anderson 1983). This is typical of in-person commemorative events.  The synchronicity of these actions is particularly interesting in this context, for we often think about how the digital can offer asynchronous engagement, yet there is also a feeling that social media constantly demands our online presence – like television and other broadcast media, it still seems characterised by a sense of liveness.

Asynchronicity draws attention to the discrete and fragmentary, whilst synchronicity highlights continuity and flow. The latter is more characteristic of traditional broadcast media like television. However, this has not disappeared with digital media. In my last blog, I mentioned some two different approaches from digital media theory:

I do not want to position myself entirely on one side of this debate or the other (and indeed Fazi does not suggest we forget the former approach altogether). In seems our digital engagements are often a complex entanglement of the two.

We still have the use of physical objects and the coming together of people at this specific time: as the Yom HaShoah website’s banner states ‘Remember Together – We Are One’ despite the fact all participants and viewers were indeed geographically apart for the first time.

But what about the physical significance of site? Pierre Nora (1989) has always been sceptical of the way ‘sites of memory’ take memory from being a personal, embodied experience and turn it into a specific, ritualistic, collective behaviour. His ‘sites of memory’ do not need to be monuments or specific historical places though, they can be media or intangible heritage. Sites of memory then are perhaps better though of as spaces – defined by the things and people who interact within them, rather than fixed places –  at which meaning is unchangeable.

Nevertheless, as I note above, for Nora, ‘sites of memory’ are problematic, perhaps we can go forward and think further about how digital media might enable a return to personal, embodied memory, yet without destroying the powerful communal experience of commemorations.

It is interesting how both the foundation stones and the Yom HaShoah examples draw attention to the digital as dependent on remediation, for they both foreground a broadcast logic. Nevertheless, they also use their broadcasts to encourage participation in creative and communal memory practices which involve doing physical things and sharing them via social media: they encourage their viewers to be produsers – both producers and users. They both illustrate how we can be together – in commemorative practices – whilst physically remaining as one.

What can we learn about the opportunities and limitations of coming together for communal rituals with this sudden move to online-only commemoration?

Might it encourage us to rethink our relationships to sites of Holocaust memory?

As the physical structures of historical places of mass violence become more difficult to maintain with age, how might the digital complement their materiality in ways that matter to memory for the future?

Let us know your thoughts in the comments below